Free shipping from 100€ to every Country in the EU.       UK-Customer? Our UK-Shop you can find here: www.blueseventy.co.uk
Categories
Information 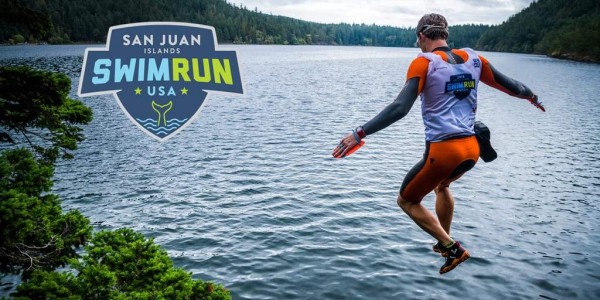 Following the success of the Casco Bay Islands SwimRun event over the last three years, race organizer SwimRun USA looked to expand, deciding to bring this unique team competition to the Northwest corner of the United States. The inaugural San Juan Islands SwimRun promised an endless array of trails, views for days and crystal clear mountain lakes. For many of the participants and spectators, especially those from the Pacific Northwest, this would be their first taste of this emerging sport. Did it hold up to the promise? On September 22, athletes convened on Orcas Island, the largest of the San Juan Islands, an archipelago in Washington state. To get there is an adventure in itself: An hour and half drive from Seattle to the seaside town of Anacortes puts you on a ferry which provides access to the stunning San Juan Islands. For a more scenic route, some opted to take a float plane which provides ample Instagram worthy photos. Orcas is a charming island: empty 2 lane roads, small restaurants, and Moran State Park, an outdoor oasis encompassing over 5,000 acres of trails, lakes and rolling hills. Nestled in the park is Camp Moran, a rustic collection of a lodge and bunk houses. This is the staging area for the San Juan Islands event, which kicked off the following day.

Inspired by the international swimrun race series ÖTILLÖ (island to island), originating in Sweden in 2006, San Juan Islands SwimRun is primarily a two-person team event - not a relay, teammates race the entire course together. Rules permit swim aids such as hand paddles, pull buoys, wetsuits and even swim fins, if you’re so inclined. Certain safety gear is mandated by race rules, and hydration and nutrition is highly encouraged. What one starts with, so too must they finish with. Changing from trail shoes to swim fins, or tending to awkward gear can chew up valuable time. Having the right teammate and equipment can make all the difference on course. The long course featured roughly 21 miles of trail running and 3 miles of swimming broken up over 25 different sections: 13 runs and 12 swims. With over 6,000 feet of vertical gain, the long course distance is truly an epic odyssey! For those less inclined (no pun intended) there is a short course option for teams and a solo division. As the official wetsuit sponsor of SwimRun USA, we were pleased to see the introduction of this event in our own backyard. We sent a team out to Orcas to compete, spectate and take in the atmosphere of this new sport and we caught up with some friends after the race to get their feedback. Athletes suit up the morning of the race at the lodge.

“Being my first SwimRun event I didn't know what to expect. After 30 minutes I knew I was going to have a great time. Something about racing with a partner makes it that much more fun.” – Guy Crawford

Long-time blueseventy employee, ambassador and professional athlete Guy Crawford traveled up from Boise, Idaho to compete in his first swimrun event. He teamed up with blueseventy Brand Manager Mike Orton and they would go on to finish 2nd overall in the long course division. Orton, a main figure in the formation of the Alliance SwimRun suit had accumulated significant experience running and swimming in a suit during the development phase of the Alliance, but had never raced this long or strenuous of a swimrun event. Team blueseventy Alliance was made up of Mike Orton and Guy Crawford.

“I was lucky to have insider knowledge of the course having come out in June to scout it with race director, Brent Molsberry, and race organizer, Lars Finanger. I knew what we were in-for: It was going to be a long, challenging day. But it ended up being far more exciting and rewarding than I ever imagined.” – Mike Orton

Kate Bevilaqua, a professional triathlete, made the trek to Orcas with Guy to compete in her first swimrun event as well, but while Guy and Mike have known each other for years, Kate was partnered with an athlete she had never met before.

“I had quite a few concerns and least of them was racing with a partner! Should I take a pull buoy or not? Would paddles be a good option even though I would be running with them? What shoes do I wear? I didn't do anything specific in training for the terrain and was worried if my shoe choice would become heavy and waterlogged.” – Kate Bevilaqua Kate Bevilaqua and Lauretta Bailin jump into one of the many swim sections.

“It was completely different to anything I have ever done before and way better than expected. The relaxed atmosphere leading into the race, the camaraderie between athletes before, during and after the event; competing with a teammate and sharing the highs and lows of such a long day together. I am definitely looking forward to doing it again!” – Kate Bevilaqua

The pair of Steve Quinn and Max Long are no strangers to swimrun, having traveled to Switzerland last year to compete in the challenging ÖTILLÖ SwimRun World Series event in Engadin.

“My enjoyment level at San Juans was far greater compared to racing in Switzerland purely due to the social aspect of it, but Engadin was much harder. The water in Switzerland was far colder and if you can believe it, the climbing: far more severe. But both events unique in their own right.” - Steve Quinn

Tags: b70, swimrun
Write a comment
We use cookies. Some of them are technically necessary (for example for the shopping cart), others help us improve our website and to offer you a better user experience.